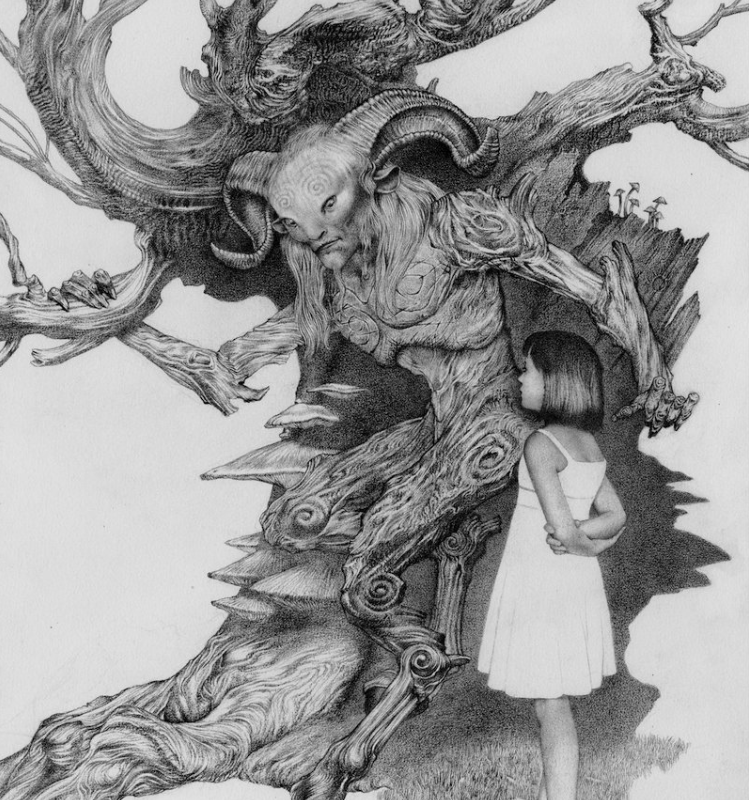 I just finished reading Pan’s Labyrinth: The Labyrinth of the Faun. It is a novelization of the film by Guillermo del Toro, written by del Toro and Cornelia Funke. Funke has been described as the J K Rowling of Germany and is the author of many YA books. She created the Inkheart trilogy, and the Dragon Rider books, as well as The Thief Lord (which I enjoyed a lot – it was set in Venice and the film version stars Rollo Weeks).

I stumbled across the book at Book Soup when I was there for Phyllis Sues’ book reading of her new book, My Trip to a Healthy and Active 96. I brought Pan’s Labyrinth home, but it just sat on my shelf. I have complicated feelings for the film. On one hand, I loved the creativity and the magical world that it created, but I hated the graphic violence in the film.

When the film came out, I was drawn to it because of the fantasy aspects, but I was also acquainted with Doug Jones from many years ago. We were both part of the young singles group at Hollywood Presbyterian Church. When I first moved to Hollywood in the late 80s, the church and the singles group seemed something familiar as I found my way around living in Los Angeles. I was just out of college and they were good folk. Some of them (including Doug – I think) came to a spaghetti dinner in my tiny studio apartment one night at La Brea and Franklin… it was a comfortable evening (though my memory of the event is marred by a tiny cockroach that was in the wrong place at the wrong time, but ’tis a different story). Moving to a new city where I knew virtually no one was a transformative year for me. Lots of adventures.

So many years later, I was happy to see that an old acquaintance from those years had a starring role in a big film. Doug played both Pan the Faun, and The Pale Man. Of course I had to see it.

I went to a screening at the Cinema Dome and Guillermo del Toro was there for a question and answer period after the movie. I asked Mr. del Toro, “Why were you so graphic in your depiction of the violence in the film?”

Mr. del Toro answered, “It was intentional. I wanted to make a strong contrast between the horror of the war and the magical world.” (I’m paraphrasing here… it’s been a few years.)

And I get that… yet, still I have not been able to talk myself into a second viewing of the film as I just don’t want that imagery in my head. There are some truly awful bits.

I spoke with a friend after seeing the film and I was surprised how differently he experienced the film. He saw it as pure tragedy – a young girl so traumatized by the war around her that she is dissociating from reality.

Whereas (despite the horrific bits) I found it to be ultimately a… well if not exactly a happy ending… I found it to have happiness… as I believed in the magical world.

So, the book has been sitting on my shelf… beckoning me to read it, but my heart has been resistant to stepping into that violent world.

Then, I heard that Cornelia Funke was going to be storytelling at the Getty on a Sunday afternoon in September. So, I attended. And I was able to ask her about writing Pan’s Labyrinth and ask what it was like to work with  Guillermo del Toro. She seemed happy to be asked about the experience. And I appreciated her thorough response.

Ms Funke said that she and Guillermo had long been friends when he asked her to write the novelization of the film. She loves the film. She considers it to be a perfect film. Every frame of it. So she was a little daunted with the task, but she essentially watched the entire film, frame by frame, and she told the tale as faithfully as she was capable of telling the tale.

When she showed him this first pass of the book, Guillermo del Toro was a little disappointed as he had hoped that she would make the story more her own. But, she didn’t want to mess with what she felt to be a perfect film, perfectly told. But she agreed to write some additional tales to weave into the larger story – tales to flesh out the world and the histories of the characters and the magical elements.

Hearing this was exactly what I needed to finally start the book that was home sitting on my shelf… waiting patiently for me to open it.

The novelization of Pan’s Labyrinth is wonderful. This is the story that I wanted when I saw the film. Yes, it still has the horrific bits, but the balance between the horror and the wonder is more even now. The story is now rich with history and details. Her language is both poetic and to the point. The story moves. At times it moves in the world of dream logic.. I would read passages multiple times to catch the sense… but like reading a poem, it was a welcome discovery process more often than not.

The narrative voice turns the tale into something more… something bigger than simply a novelization of a book.

“Death sighed. She was used to men begging for another few years or months, sometimes even hours. There was always something unfinished, something undone, unloved. Mortals don’t understand life is not a book you close only after you read the last page. There is no last page in the Book of Life, for the last one is always the first page of another story. But the tailor moved her. There was so much love in him… and kindness – a quality Death had found to be rare among men.”

So, I heartily recommend the book Pan’s Labyrinth if you like fantasy and the magic of old tales. This tale is beautifully told. It was an excellent read.

You can buy the book here:

Strange the Dreamer & Muse of Nightmares