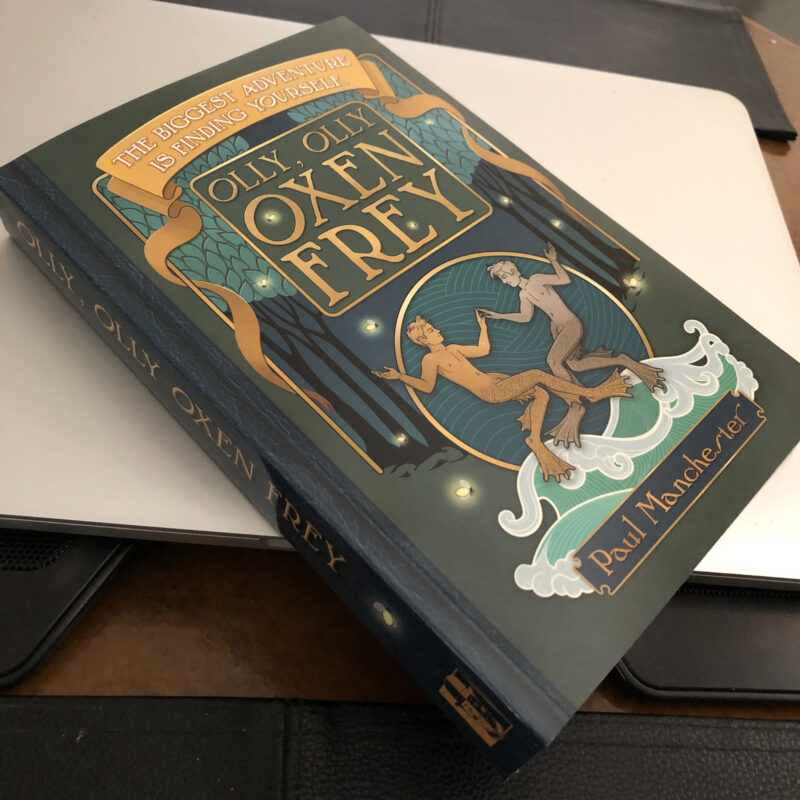 It has been a fascinating journey to write Olly, Olly Oxen Frey.

A few years back I was contacted by Lion Forge LLC to write a book for The Magic House in St. Louis, MO. The folks at Lion Forge are wonderful people… extremely gifted and they produce marvelous graphic novels. As someone who normally makes a living as an illustrator, it was exciting to be hired purely as a writer for a chapter book. I love writing and I love story creation. I was given a tremendous amount of freedom. I was told to create a Charlie and the Chocolate Factory sort of chapter book, an adventure that was full of fantastic elements and opportunities for strange critters that could be useful for marketing. They also asked me to work in some educational aspects – as that is what The Magic House is about. It was a tremendous experience and I am very proud of Neener! Neener! Neener! (the story that I wrote for them). I did not do the illustrations for it, but I did do the overall layout of the book.

Anyway, that experience inspired me to finally write a novel of my own, Olly, Olly Oxen Frey. A novel where I was not pleasing a client, but simply pleasing myself. Ultimately if one is going to spend months of one’s life holed up with one’s computer, one had better enjoy the process. And I did. I wrote the book I wanted to read when I was 15. I typed, and giggled, and cringed. I was surprised when my characters began asserting their individual wills. I’ve heard writers talk about channeling a story from beyond and it wasn’t like that, but there is a very real dance between the outline that is created at the outset and the characters’ journey. As I listened to the characters and climbed inside their heads, I found the story often traveled to unexpected places. There were moments when they said things I hadn’t intended for them to say. It is a strange dance to write a book when the characters become their own people.

Assorted friends were kind enough to read the 450 page PDF and give me feedback. It was tremendously useful. Kat found a plot hole I had been trying to ignore, and others were able to give feedback about how much reference to sexual things is appropriate. It was also important to step away for periods of time to be able to see the language afresh. Lots of rewriting. But it is done (if a book is ever really done).

When I received the test copy I saw that the couple illustrations it included worked rather well. It is a long book. It became apparent that even if the illustrations were black and white, they would be a help. So, that is where things are. I am working on illustrations on the weekends and hopefully will be able to dive full time back into artwork by mid February. Ultimately I hope to have the book out by late spring as I am tremendously impatient to dive into writing the next book. I’m a couple chapters in to Bryton Wilde in Frey and it is gripping my daily thoughts much more than expected. One foot after the other… or rather one keystroke after another… the path to be a writer is to write and keep writing. Persistence… and a commitment to write about that which pulls at your gut.